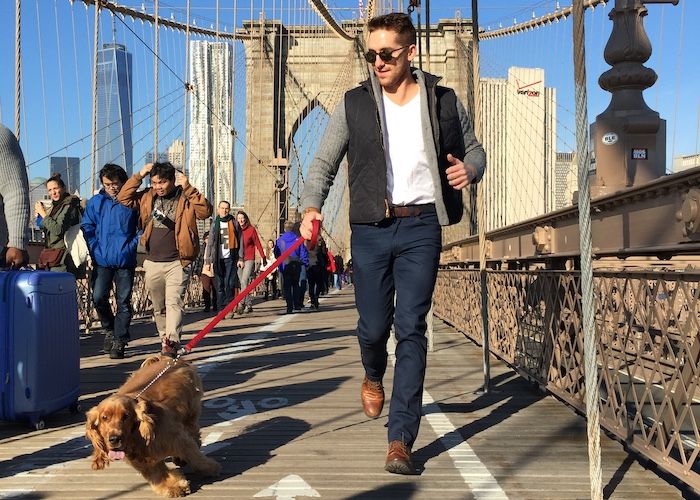 Pro Tip: If you are planning a trip to New York, bookmark this article in your browser. Seriously, there is a ton of content linked here about everything you need to plan the best trip ever to NYC!

The Brooklyn Bridge is without argument New York’s most iconic bridge which makes it a must-visit attraction. At the time of construction, it was the world’s longest suspension bridge and an unbelievable feat of engineering.

It connects the Financial District/Chinatown to downtown Brooklyn. It is always open and free to walk across, which definitely can help out your budget! Walking over this bridge is also a very romantic thing to do on a nice spring or fall day when the sun is out. The above photo was taken on a beautiful day in December.

You can do that in Manhattan or ideally in Brooklyn overlooking the city. I recommend Harriet’s Rooftop & Lounge, which is located in Brooklyn Heights. You get a killer view of Manhattan and the iconic Brooklyn Bridge! If you want more Brooklyn content, check out our favorite things to do in Brooklyn!

Washington Square Park is as much a part of New York history as the Empire State Building or Central Park, which is why it is the landmark square of Greenwich Village. Imagine how Bob Dylan or Andy Warhol must have passed more than a few afternoons there contemplating their works of art.

In the center of the park, you’ll find a larger fountain framed by the triumphant arch which is pretty epic and a great place to snap a pic. On warm days you’ll find musicians busking in the square which can be more than you’d believe. I’ve listened to a student play a mini-grand piano there and the memory sticks with me today.

The Chelsey Market is exactly what it sounds like: a cool market in the Chelsea district of NYC. There are tons of cool restaurants, shops, and places to spend your money at which makes it attractive and scary at the time.

If you go by, definitely check Los Tacos #1 or Los Mariscos for Tacos, both are great. If not in the mood for Mexican, try Lobster Place which is also exactly what it sounds like!

Photo by Amanda Hasson
Central Park is one of the most iconic greenspaces in the world. It’s 2.5 miles long and just less than a mile wide, smack dab in the center of New York City. According to “The Guardian” newspaper, Central Park real estate is worth 39 trillion dollars, but would NYC property be worth so much without it? Probably not.

Central Park is one of the main attractions that draw visitors to Manhattan and without it the city would be very different. There are tons of things to see and do in the Park including renting remote control boats, going hiking, the zoo, multiple museums, and more!

Get prepared for your visit by reading our list of the top things to do in Central Park! Plus we know the best restaurants and hotels nearby!

Their specialty is the Dirty Cheesecake which is delicious, but you could cross cheesecake, red velvet, and the famous black-and-white cookie off your list here. D-LISH!

INDULGE YOURSELF WITH A LOCAL FOOD AND WINE TOUR

Photo by Amanda Hasson
Broadway definitely did not invent the theatre, but it sure did bring it to an entirely new level. Seeing a Broadway show in NYC is close to obligatory! And while you’re down here, you can find other cool things to do around Times Square!

The Museum of Modern Art (MoMA) is one of NYC’s leading museums and arguably the world’s greatest modern art collection. The gallery itself is a work of art that is only out-shadowed by its prestigious collection of over 200,000 pieces. You’ll find everything from Picasso to Jackson Pollock and Mark Rothko here.

It most definitely has more than just dinosaurs as well. That’s just part of why it is exciting to visit this museum even if you don’t have kids. They have exhibits on just about everything you could imagine!

Photo by Amanda Hasson
There are 7,000 high-rise buildings in NYC (115 feet) and 93 buildings are at least 650 feet high, which makes for an incredible skyline. The most famous of all buildings to climb in NYC is undoubtedly the Empire State Building in Midtown. The building is used mostly for office buildings and is extremely prestigious. I once visited an accountant there that I definitely could not afford, but I got to see a nice view from an upper floor.

In terms of newer buildings that are famous, the One World Trade Center (which also goes by One WTC or Freedom Tower) is now the tallest building in New York City. You can get tickets to the top of the Freedom Tower, which I have done and would definitely recommend, along with visiting the nearby 9/11 Memorial.

Check out our guide for where to stay in NYC to get suggestions at every budget!

Wall Street runs through the financial district and is home to the New York Stock Exchange which is an iconic building. You won’t be able to go inside or even too close, but it is still worth the time. Right near the NYSE is the Federal Reserve Bank, which is home to some extraordinarily large gold reserves.

The NYSE is coincidentally only a 15-minute walk from Ground Zero and the new One World Trade Center, so you can see it all together.

That said, the best versions of these Americanized ethnic foods may be in NYC. You can literally find anything here, and it is often different than you’d find in its country of origin but nonetheless delicious. Some things you have to try are:

Joe’s Pizza has a few stores in NYC and is regarded as the best pizza by the slice in the city. Head over there and decide for yourself!

See which Joe’s Pizza is closest to you here.

DID YOU BOOK YOUR NYC FOOD TOUR YET?

The collection is one of the greatest on Earth, which is why you absolutely cannot miss it. We recommend you take a tour of the MET since it will elevate your experience. Local guides in NYC are passionate and will save you from a less-than-awesome experience where you stare and wonder what you are looking at.

Also, check out our article on what to see at the MET. They are super-comprehensive but not meant to replace a tour. I find when I do background research on a museum, it becomes even more interesting when I actually explore with a guide.

The now incredibly famous park was once a bustling train line bringing goods into New York City. Originally it was on ground level, but there were far too many causalities that the city elected to elevate the tracks. Eventually, the trains became less popular with the integration of modern trucking. By the 60s, it was barely used at all and by 1983 there were plans to demolish it.

Plans to destroy the structure were met by progressive residents who wanted to see it used differently. Twenty years later in 2003, the project finally took flight, and in 2009, the first section opened up. Today, the park is 1.45 miles long with hundreds of plant species which makes it a much-needed break from the city inside the city. At one point, it was the most popular destination on Instagram.

This new and interesting art installation is all the jazz right now. It is a honeycomb series of staircases and platforms that is 16 stories tall and extremely mind-boggling. I visited this when it was first opened, and it’s a cool photo op for sure.

In just 20 minutes or so, you can walk from Little Island up the High Line and end up at the Vessel, which will be an artistic and cool afternoon full of exercise.

If you haven’t seen it in person, it’s massive and takes your breath away. There’s also a relatively new museum on the grounds to explore.

The Statue of Liberty is grouped into the category of “Colossal Statues” and the first on record was built in 280 BC in Rhodes. The Roman Emperor Nero, first century AD, also built a colossal statue in his own image in the valley where the Colosseum would later be erected. You’d never have guessed, but all three of these statues were about the same height!

We’ve put together all you need to know about how to visit the Statue of Liberty, plus things you’ll see there and at Ellis Island.

Two memorial pools now sit where each building once stood to commemorate the victims and heroes of that day. The memorial is free to visit since it is an outdoor memorial with a glade of trees to visit and the FDNY Memorial Wall too.

That said, there is a museum and souvenir stand which generate revenue to support the memorial. In terms of things to do in NYC, a visit to Ground Zero is a must. If you want to stay near the memorial or Financial District, use our guide to the best hotels and even our favorite restaurants.

While you are there, definitely walk through the Oculus at the World Trade Center PATH station which connects 12 subway lines and is honestly one of the most beautiful subway stations on Earth. The station, according to NY Port Authority, serves over a million people every week.

No comments to show.